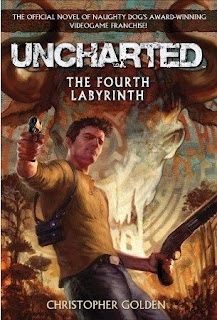 Uncharted: The Fourth Labyrinth is an interesting case study in multimedia franchises gone wrong.  Based on the popular, critically-acclaimed Uncharted video game series, Uncharted: The Fourth Labyrinth is the one and only tie-in novel and follows the hero of the video game series Nathan Drake and his partner Victor Sullivan on another adventure that takes place between Uncharted 2 and 3 (although is a completely standalone work that makes no references to previous plotlines).

A bit of background on the series for those unfamiliar with the Uncharted brand.  In addition to the novel, there have been 5 main games to date (2016), a  4-episode motion comic, and a 6-issue regular comic, all of which revolving around Nathan Drake, a modern day treasure hunter.  The series started as an homage to the Tomb Raider series and takes massive inspiration from the Indiana Jones film series.  Uncharted games do a good job of capturing the pulpy, adventurous spirit of those films.

After the first two Uncharted games the series began to carve out its own identity and formula and while all of the games in the series are considered good or great by critics the most common criticisms tended to call out the Uncharted formula: Drake and Sully (Victor Sullivan) get a lead on a treasure, most commonly located in a lost city.  The duo team up with someone who double-crosses them or are conscripted by someone who forces them to find the treasure.  Drake climbs on ancient ruins, fights mercenaries or pirates, and kills enough of them to be considered a mass murderer.  Drake finds the treasure and in the process has a showdown with the main antagonist.  The lost city crumbles on itself.  Drake escapes.  The anatagonist does not.  Drake ends up with only enough trinkets of treasure to fund his next ill-fated adventure.

There-in lies the strangeness of Uncharted: The Fourth Labyrinth.  It adheres to the Uncharted formula in all of the worst ways and ignores all of the best.

Uncharted: The Fourth Labyrinth is brimming with potential and the real shame is that none of it is effectively capitalized upon.  The basic plot involves the legend of King Midas hiring Daedalus to work "magic" as an alchemist and hide the king's gold in a series of labyrinths.  It's a hodgepodge of cultural references and myths but it works and the creepy cult members in black robes out to stop the truth from spreading are a pretty great addition.  Where the novel immediately falters, however is in the level of violence.  I know this is slightly hypocritical given that through the course of a typical Uncharted video game Nathan Drake ends up racking up body counts estimated between 300 - 450 victims per game.  However the violence in the games is never gory or gratuitous.  It's a ridiculous disconnect that occurs because one of the game's core elements of gameplay is shooting a gun.  What fun is shooting a gun without someone to shoot at?  The whole thing leads to an interesting, yet well-tread analysis of ludonarrative dissonance in video games.  The point being that in a fictional medium, in which there is no need to serve shooting a gun as a required element of gameplay there is an opportunity in this novel  for Drake to shed his past as a mass-murderer and focus less on action and more on adventure.  Surprisingly, The Fourth Labyrinth takes the opposite approach and ratchets the violence up to a whole new level.  Not only does Drake end up killing scores of "bad guys" but the detail and description of the violence is more grisly than ever.  The impetus for this particular adventure occurs in the opening chapters when Drake and Sully's old friend Luka is found dismembered.  It's a sudden dark turn for the franchise and if finding Luka's head sitting on his chest seems like a bit much it's just the tip of the iceberg as throughout the book throats are slashed, people are stabbed, shot and beaten in colorful detail.

Uncharted games are also known for their spectacular visuals and "set-piece" moments.  These are huge action sequences that are amazing to watch and exciting to play.  For example, Drake survives a train derailment, climbs out of the wreckage only to have to fight his way out of a horde of enemies, or escape a collapsing building, or a cruise ship capsizing, or a cargo plane crashing into a desert.  These amazing moments led to Nathan Drake being referred to as the John McClane of video games (the plucky, unkillable hero of the Die Hard films) and became one of the main draws of the franchise.  What ridiculous situation will Nathan Drake find himself in next, and how will he miraculously survive by the skin of his teeth?  Which is why it's so strange that The Fourth Labyrinth has none of these moments.  These sequences were done in the video games at great cost, often pushing the boundaries of the technology on which the games run.  In a film these would be elaborate multi-million dollar sequences.  A novel is the perfect medium to top them all as there are no restrictions to the imagination.  Yet, nothing.

The set and production design also play a large, jaw-dropping role in Uncharted games as Drake will stumble onto a lost city or an ancient temple and find himself confronted by massive gorgeous statues or breath-taking vistas and archictecture.  This is another aspect of the series completely lost in the novel as The Fourth Labyrinth takes place in a series of labyrinths.  Underground structures with stone floors, stone, walls and stone ceilings.  Imagery about as vivid as a dungeon from the original The Legend of Zelda game.
Christopher Golden is a good writer.  His prose is well-constructed and the imagery he conjures is vivid without being overly descriptive.  The Fourth Labyrinth was produced  in 2011, a ridiculously busy year for the Uncharted franchise.  The studio responsible for Uncharted had farmed out development of the PS Vita game Uncharted: The Golden Abyss to Bend Studios and had split their development team for Uncharted 3 to start work on their next big game The Last of Us.  I assume that the collaborative environment for telling stories in the Uncharted universe was a bit challenging for Christopher Golden and as a result we receive story with one-dimensional characters and zero character development.  It's a shame because telling Uncharted stories in novel form had the potential to capitalize on all of the things that made Uncharted great while shedding all of the criticisms that have held the games back.