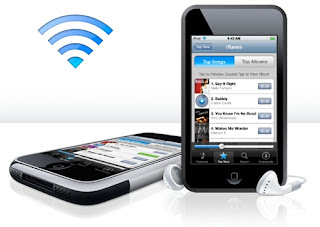 In a few weeks, Apple, Inc. will roll out a new service to users of its iPhone and iPod Touch. For the first time, these WiFi enabled devices will be able to access the iTunes Music Store from any wireless hotspot on the globe.

The other day, I found myself in an Apple store (that iPhone rebate was burning a hole in my pocket!) and I decided to check out the new line of iPods while I was there. To my surprise, I found that the iPod Touch already had an icon for the WiFi store (something iPhone users have yet to see) and much to my devastation I found that podcasts were not included in any of the iTunes listings. Searching for popular podcasts like Maniacal Rage or NPR's "Wait, Wait Don't Tell Me!" yielded mo results and when browsing by category there was no option for podcasts.

While the iTunes WiFi Music Store will definitely be able to satisfy any "I-gotta-have-it-right-now" urges that I may have in the future (for music), what really had me excited me was the idea of being able to download updated podcasts on the go. I listen and watch a lot of audio and video podcasts and one thing that has always been a bummer is waiting until I get home to download, update and sync new episodes.

Obviously it could simply be the case that the version of the iTunes WiFi Music Store that I played with on the iPod Touch is not the finished version and that podcasts could very well be included when the service is officially launched.

Also likely, however is the possibility that podcasts will be excluded from the store. Due to the free nature of podcasts and the fact that they are generally exponentially bigger than your average music single, it could make sense from a bottom line perspective not to include them in the WiFi offerings since they would hog bandwidth and not generate any cashflow. Apple has already decided not to offer their movies and television shows through the wireless store (and considering the ridiculously bloated compression schemes they use, I don't blame them).

On the otherhand, it's called the iTunes WiFi Music Store. It's not like this data would be moving over AT&T's EDGE network. What does it matter whether you're downloading your podcasts to your computer or your phone/iPod over a WiFi network? They're all sharing the same type of connection.

Regardless, more light will be shed on the situation as it's made available to the public and even if podcasts are not initially offered through the wireless store, it's always possible for them to be added in the future.
by Ahren Sievers at 10:53 AM
Email ThisBlogThis!Share to TwitterShare to FacebookShare to Pinterest

http://www.youtube.com/watch?v=kAO4EVMlpwM
by Ahren Sievers at 10:07 PM
Email ThisBlogThis!Share to TwitterShare to FacebookShare to Pinterest

I heard a lot of harmonicas this weekend, oddly enough. This one was certainly the illest.

by Ahren Sievers at 10:03 PM
Email ThisBlogThis!Share to TwitterShare to FacebookShare to Pinterest