Well, it looks like June 13th - National 'Blog Like It's The End of the World' day was a huge success.

I have to admit I had no idea about this phenomenon until yesterday morning. It took me by surprise and I just got caught up in the act. I judging by comments on My Elves Are Different, that happened to a lot of people. I think it's kind of funny how blogging about a false zombie attack swept the internet and 'infected' people just like a zombie plague. Albeit, a plague that only seemed to effect geeks and English majors (I got my degree in Journalism, thank you very much ;).

If you missed out on the fun, be sure to stay tuned next year. It sounds like we will be trying for June 13th again. It should be awesome because June 13th is a Friday! 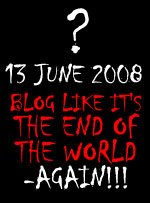 For the first few minutes of reading those posts, I was the most confused mofo in the QC.

Was giving me mad flashbacks to Shaun of the Dead. Hope you have seen that one...if not, you really need to.