So the 20-year nostalgia window has rolled to the early 2000’s which, musically, was one of the most important points in my life.  There was sooo much good music coming out back then, I knew sooo many people who were into good music and it was also the point at which my roommate Lyle told me to throw caution to the wind, spend some money I didn’t have to buy turntables, and start calling myself a DJ.

After listening to the Hospital Records 20th Anniversary podcast w/ Chris Goss and Tony Coleman, I went rummaging through the CD-Rs in my basement in search of more Jungle Drum ’n’ Bass.

[A couple of things to unpack here:
1. Back in the day, hard drive space was at a premium.  You’d rip CDs onto your laptop, listen to the MP3’s until you got sick of them, then get more music and burn the old stuff to CD-R’s to make room.  A lot of those CD-Rs are still down in the basement waiting to be rediscovered and ripped again.
2. Drum ’n’ Bass used to be called Jungle.  It’s a whole thing.  Chris and Tony get into it a little on their podcast.  The terms used to be interchangeable, but there are some subtle differences.  From my uninformed perspective, Jungle tracks tend to have a lot more rhythmic elements going on and the tracks were a lot longer so they would be easier to mix.]

I came up from the basement with a handful of great DJ Mixes that I had forgotten all about, but remembered immediately.  Had they been vinyl they would have been worn out from so much listening in college.  We’re talking DJ Dara - Full Circle: A Drum & Bass DJ Mix, Dieselboy - Project Human, Freaky Flow - Obscene Underground, J.Majick - Drum ’n' Bass Mix, INCredible Sound of Drum'n'Bass Mixed by Goldie, and of course Plug - Drum ’n’ Bass for Papa.  Behind all of them, was DJ Ronin - interplanetary APOCALYPSE.

Ronin’s mix was put together probably somewhere around 2003.  It’s an all vinyl concept mix with Apocalypse Now as a thematic through line (Get it?  Jungle).  Completely hand-mixed, all vinyl.  One-take, no do-overs.  I don’t have track list, but a couple standouts are the Krust & Die remix of Freeland’s - Supernatural Thing which itself is a cover of the Ben E. King original and another Freeland track We Want Your Soul, the Ed Rush & Optical remix that rounds out the mix.  Ronin kills it.

I met DJ Ronin, aka Jeff (now Allen) Hammer back in 2001.  I remember first noticing him or him noticing me because we both had minidisc players.  Coming into class, headphones blasting, popping open our minidisc players and rummaging around in our Jansports looking for the next album or mix to listen to.  He was a generous dude right off the bat; coming to class with a minidisc recording of Massive Attack’s Mezzanine for me to borrow.  We started trading discs back and forth and soon discovered that we were both DJ’s.  Come to find out that Hammer was the real deal.  He had two Technics 1200’s, a beautiful (I want to say Pioneer) mixer, and lots and lots of records.  He had joined the Navy straight out of high school and travelled to Japan and all over the world, which is where (I believe) he bought his turntables and taught himself to DJ.  So he was a bit older than I was and was never shy or hesitant to push records and CD’s into my hands.  I was literally just starting as a DJ, and he taught me the basics.  As a drum ’n’ bass DJ he was into mixing and beat matching, but he encouraged my love of turntablism, scratching and hip hop.  He gave me my first battle record, so I could stop scratching samples from old children’s 45’s and tried to cook up ways for us to combine forces and do some kind of drum ’n’ bass mix with me scratching samples. 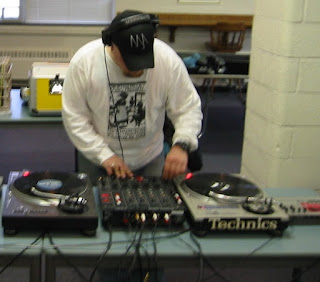 Hammer was a great friend and looking back with nostalgia and a little bit of regret, I wish I had been a better friend to him.  I wish I would have a absorbed more of what he had to teach and appreciated drum ’n’ bass a bit more (I liked it back then, but have since come to adore it).  It has been 20+ years and I have yet to meet another DJ in real life.  Someone to hang out with and spin records and talk about needle drops and faders, beat matching and samples.  I took that for granted at the time.  I started DJing at the height of DJing’s popularity and in my naïveté I thought DJing would just keep going on its upward trajectory and that I would meet DJs everywhere I went in life.  We have the Internet now, which is great, but it doesn’t compare to a real person you can hang out with.  There’s a phrase and sentiment I have always appreciated: “The most important people in your life are the people in the room with you right now.”  Hammer was straight-edged before that was even a thing (let alone cool) and at that point in my life I was on a quest to destroy as many brain cells as possible.  Hammer was (from my perspective) a little too clingy; probably understanding the true value and rarity of friendship and I was on a mission to be aloof, mysterious and too cool for school.  I wanted to hang out with the people who didn’t want to hang out with me and was kind of a dick to the people who did.  So, I wish I had been a better friend to Hammer, because I realize now that the more we hung out the more we could have created together and two friends creating something cool is the start of a scene and a scene blowing up could lead to a movement.  Who knows where two Iowa City DJ’s would have actually ended up, but that’s the whole point of this particular thread of regret.

I reached out to Hammer with the last email address I had after finding Interplanetary Apocalypse, but haven’t heard back.  Hammer if you’re reading this, get in touch and keep making mixes!