I mentioned in my last post that my mom passed away.  I've been thinking about posting something about it here on The Neopologist ever since it happened.  Trying to write it up as some kind of record for what happened, but finding the prospect daunting.

Well, thankfully, I don't have to:

wreaked havoc outside on the Sievers Certified Organic Farm, ripping apart dozens of trees and sending one crashing down on a car.

“If you’ve ever seen a video of a bomb blast and you see the shock wave after, that’s how the storm hit the house,” son Ryan said. “That wind came right across the field and you could see it change. The grass just went flat.”

As the storm eventually moved past the farm on its ruinous route across Eastern Iowa, silence settled briefly in the basement. It was broken by a ringing phone.

A doctor from Des Moines was calling. It’s time, she told Veryl, to remove Ivy — his wife and the boys’ mother — from life support.

“The storm had finally died down and at that moment, that’s when my mom’s doctor called us while we were hunkering in the basement,” son Ahren recalled. “She had been preparing for the inevitability of having to take Mom off the ventilator. That was the moment she decided to be straight with us and said it was time. It was 100 percent the worst day of my life.”

The Wednesday before the Aug. 10 storm, Ivy and Veryl, both 69, were having coffee. Ivy was working on her plants. The two loved the garden and drank coffee near it every morning.

Ivy called for Veryl as she grew dizzy and fell.

“I saw right away she had a stroke,” Veryl said. “Her speech was slurred and her left side didn’t seem to work.”

An ambulance took Ivy to Grinnell Regional Medical Center. She later was flown to Des Moines, where she stayed at Iowa Methodist Medical Center for her last six days.

Ryan was in a conference call for work in Chicago, where he lives, when he got a call from his dad. Ryan and his brother, Ahren, who also lives near Chicago, headed to Iowa.

“We were thinking we would be there for a couple of days to help out, make some meals for when Mom came home. That’s where our mind-set was,” Ahren said.

“We got to the farm and it was so lush,” Ryan said. “They had planted so many trees.”

The 160-acre property that is Sievers Certified Organic Farm is at the end a dirt road off Highway 30. The driveway leads past sheds and to a large home in the center.

The stroke had come with no warning. Doctors said Ivy suffered a hemorrhagic stroke caused by an aneurysm due to hypertension.

“It really, truly came out of the blue,” Ryan said. “She didn’t have any specific symptoms. To say the least, I now have a blood pressure monitor at home. For all of us, it was a complete shock.”

Ryan’s husband arrived Aug. 9 with their two dogs. With Ahren and his wife, the family went into support mode, cooking and cleaning for their father and taking care of the home.

Because of COVID-19 protocols at the hospital, the family had to set up Zoom meetings to visit Ivy virtually. Veryl said she wasn’t conscious and couldn’t breathe on her own, but the family was able to talk to her.

“I had read about people going through this during the pandemic, but sitting in the middle of it myself was unbearable,” Ryan said. “I wanted to crawl out of my skin.”

They would not be able to visit her in person, however, until it was time to say goodbye.

Day of the derecho

The Sievers learned a storm was brewing but, like most Eastern Iowans, had no idea how devastating it would prove to be.

“We didn’t have much warning. I looked at the radar and saw a big, red spot, but thought it was just going to be some heavy rain,” Veryl said.

Ahren and his wife had gone on a walk around the farm before the storm came and told Veryl that they should close the doors on some of the farm’s buildings. Veryl and Ahren headed back out to do just that.

“I said I’d go with him. I still don’t know; he’s fully capable of closing his doors. He doesn’t need help,” Ahren said. “But I went with him for some reason.”

They headed to the cattle shed to close the big sliding door. As they walked, Ahren said something in the atmosphere felt off.

The storm suddenly picked up speed and the two hid in a hay barn, becoming soaked as rain blew in. A tree landed on the opposite corner of the barn as they sheltered.

“We were in a nice little pocket where we weren’t getting blown away, but we were getting drenched with rain,” Ahren said. “Our clothes were soaked through and it was really cold.”

“I was just wanting it to be over,” Veryl said. “Trees were breaking and everything. We lost over 100 trees on the property. We got 20 acres of timber and it’s a jungle out there still.”

Veryl had a truck in the cattle shed and when the wind died down a little for a moment, he and Ahren made a dash to where the truck was unlocked with keys inside.

The drive was just 200 yards, but there was little visibility.

“You could feel the truck hydroplaning the whole time, sliding around,” Ahren said. “We went over two small, downed trees and we made it to the driveway and ran for the house,” Ryan said. “We sat there and after the storm, you could see the light a bit. We kind of just sat there in silence for a little while.”

That’s when Ivy’s doctor called from Des Moines, pressing for a life-support decision.

“We made the decision that we were going to put her into comfort care and we would take her off life support,” Ryan said. “We had a really big cry and lots of hugs.”

As one reality set in for the family before they even had the chance to leave the basement, another waited upstairs.

The storm meant the family’s trip to say goodbye to Ivy had to be delayed a day.

“When we walked out, I wanted to throw up,” Ryan said. “The sheer volume of crap laying in the yard. You can’t even fathom what could do that. You see things that look so totally unnatural to the eye.”

Veryl said he was in shock to see the damage the storm had done.

“We were then stuck with cleaning up the mess and also figuring out the details of Ivy’s death and what to do there. It was stressful.”

Neighbors showed up to help clear the driveway of all the debris.

“I’ve had a lot of people come and help clean up,” Veryl said. “Awesome friends came with equipment.”

At the end of the first day of clean up, the family was exhausted.

“By the time we got that done, it was almost evening,” Veryl said. “We called the hospital and said we would be down the next day.”

So on Aug. 11, Veryl and his two sons went to Des Moines to see Ivy for the final time.

“She wasn’t conscious, but she did open her eyes when she heard my voice,” Veryl said. “We said our goodbyes and they took out her breathing tube and she was gone within 20 minutes. That was a tough day.

“We had a really good journey. It was pretty magical. We made a pretty good team and I certainly didn’t want it to end so soon,” he said.

Veryl and Ivy met 47 years ago in Germany. He was in the Army and she was there for college.

“I kind of screwed up her plans,” Veryl said. “She didn’t go back to school and we got married in Switzerland and came back to Iowa.”

Veryl said the family wants to wait to hold a celebration of life for Ivy until later due to the pandemic. For now, he has her ashes.

“We want to have a tree replant,” he said. “Ivy was very into nature and trees and plants and everything. She would’ve been devastated to see the destruction that happened here.

“And her birthday is in May,” he said, “so maybe that time of year.” 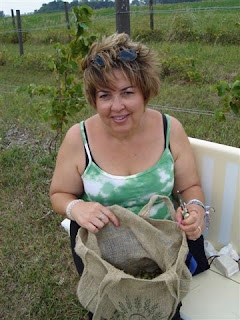