Music Found: Wu-Tang vs. The Beatles

Back in 2004 a relatively unknown hip hop producer came up with a mixtape that combined Jay-Z's seminal (and supposedly final) album, The Black Album with The Beatles' classic 'white' album. The mixture went beyond the simplistic crossfading of normal mash-ups in that Dangermouse sampled and re-invented the instrumentation of the Beatles record to create new tracks for Jay-Z's a capellas.

The result was one of the most amazing albums of the year and a copyright lawyers nightmare (or wet dream, depending on what side of the table you sat). In the end, The Grey Album was released as a free download for a limited time.

I remember that album with extreme fondness. To this day when I think of Jay-Z tracks like 99 Problems or Public Service Announcement, I think of The Grey Album versions.

The Grey Album seemed like a once in a lifetime combination, but now, Tom Caruana has stepped from relative obscurity and dropped a bomb blast of a free download on the unsuspecting Internet. Wu-Tang vs. The Beatles. 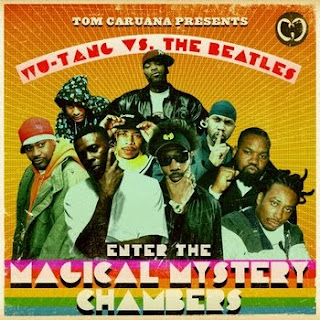 Many hip hop fans (myself included) questioned the pairing of Jay-Z and The Beatles.  At the time, it hadn't really seemed like Jay-Z had earned his place in the pantheon of hip hop all-stars (despite his constant barrage of lyrics to the contrary) and thought he wasn't deserving of such an honor. Dare I say, Wu-Tang Clan are The Beatles of the hip hop world. A group of hugely talented artists, some how able to keep their super group together long enough to produce some of the most influential albums in the genre, only to break up and go on to create more as solo artists, while one member died early.

After listening to Wu Tang Clan vs. The Beatles, I have surprised even myself with the admission that it is better than The Grey Album. As unbelievable as that sounds, consider that while The Grey Album was limited to samples from the white album and vocals from The Black Album, while the parameters of Wu Tang vs. The Beatles allowed Tom Caruana to pick and sample the very best from The Beatles catalog, the Wu-Tang catalog and even solo work produced from members of both groups. Add in a smattering of interviews with Beatles fans, classic Wu-Tang skits like "Where my killa tape at..." and you have a more cohesive and expansive listening experience.

Don't get me wrong The Grey Album was a fascinating sonic experiment. It remains one of my favorite albums, but it was a much more straight-forward and rigidly defined project, taking one Beatles song and combining it with one Jay-Z track. Wu Tang vs. The Beatles has the luxury of having room to breathe and in the space of one track can run the gamut of resonating like a retrospective homage to a groundbreaking post-modern original remix.

You can download Wu Tang vs. The Beatles for free at: http://wutangvsthebeatles.bandcamp.com/
Email Post
Labels: Music/Found Music/Review What's Cool