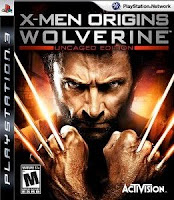 Adaptations of movies into video games have always been hit or miss.  Which is why it's always a massive shock when a game based on a movie can come along and have the audacity to be good.  Gamers were floored after playing The Chronicles of Riddick, GoldenEye 007 or even Aladdin for the Super Nintendo.    Now, add to that list X-Men Origins: Wolverine, the video game based on the 2009 summer blockbuster of the same name.
What really sets Wolverine the video game apart is that it is not only a good game, but it is actually better than the movie!  It may be hard to believe, but while the film was a decent, PG-13 romp around the most famous X-Men's backstory, the game is an M-rated, gore-filled, power trip that expands on the visuals of the film by adding plot from the lauded comic books.

Much in the way that the Harry Potter video game I recently reviewed failed, Wolverine succeeds.  The visuals of Wolverine-the film are consistent with Wolverine-the game, while the game's length is padded to expand it beyond the film's 2-hour running time, by using the ample and brilliant material found in the X-Men and Wolverine comics.  The end result is that Raven software has created a real labor of love that will appeal to any fan of 'The Wolverine'.

Since we fans were first introduced to this unruly anti-hero with his metal skeleton and razor sharp adamantium claws, we couldn't help but imagine what would happen if Wolverine were finally let off of the leash of the Comics Code Authority or his youth friendly PG-13 rating and let to run wild in all his feral glory. 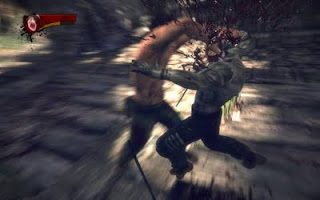 Thanks to the game's well-deserved Mature rating, that train of thought need no longer exist only in the realm of fantasy and the end result is something that closely resembles the God of War formula.  Take a nearly indestructible and highly incensed hero and lay waste to legions of enemies in the most gruesome and satisfying ways possible.

Structurally, the comparison to the God of War games is also apt.  As Wolverine, you will navigate through each level, mashing on a couple attack buttons to fight off your foes, grabbing them to throw them, execute them or use the environment to do the dirty work for you and just generally flip out and kill everything that moves.  One, incredibly fun mechanic introduced for Wolverine is his lunge move.  The lunge allows Wolverine to lock on to an enemy from across the plane and then leap through the air and spear him with his claws.  Not only is this a useful and awesomely satisfying attack, but it's also used as a navigational necessity.  The lunge is sometimes the only way to cross a chasm or jump on to a vehicle.  It sounds contrived, but the game pulls the occurrences off in such away that it doesn't feel too artificial and besides, the lunge move is just so much fun to pull off that you really won't mind it. 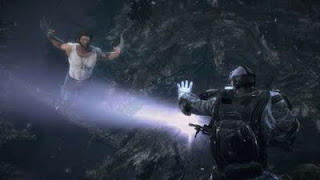 Also like God of War is the existence of special moves which are fueled by a rage meter.  Killing enemies and pounding open boxes and crates will release orbs that fill this meter.  Wolverine can use the contents of his rage meter to fuel some spectacular special moves as well as a "Berserker" state that makes all of his normal attacks more powerful for a limited time.  You'll also find the inclusion of some extremely cinematic Quick Time Events in X-Men Origins: Wolverine.

The visuals are quite decent in Wolverine.  The game uses the Unreal engine at its core and runs at a decent framerate, although it is prone to slow down when a number of enemies and effects are all happening on screen at once.  One of the most stunning elements of the game's graphics is the depiction of Wolverine.  As Wolverine begins to take damage, you can actually see his body being chipped away by gunfire, explosions and other enemy weaponry.  When Wolverine is at the brink of death it's usually possible to see his exposed ribs poking out of his chest cavity and most of his face missing.  After a few seconds his mutant healing factor will kick in and you can watch as all of his wounds close up and heal.  It's pretty amazing the first time you see it and novelty never quite wears off. 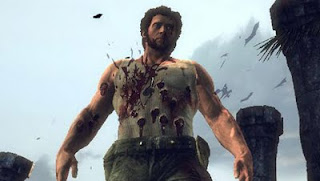 Also included in the game are several high quality pre-rendered cinematic cut scenes.  These scenes are absolutely gorgeous and a joy to watch as they generally maintain the same gruesome vibe as the rest of the game while being stunning in all of their high definition glory.  The scene in which Wolverine's skeleton is infused with adamantium is a particular stand-out.

The story of the game is heavily adapted from that of the film, but also filled in with elements from the comic books, for example The Sentinel program that produces giant mutant-terminating robots makes an appearance.  And the structure of the story-telling is also done in an interesting mash-up of flashbacks.  Which help vary the locales you'll find yourself in as you jump from one moment in Wolverine's past to another.  At first it feels like the story is randomly hopping around, but as the plot is fleshed out, the cleverness of the storytelling becomes apparent.  Most of the cast from the film also make appearances in the game, and as a result, the voice acting is decent.  No one sounds tremendously like they were phoning it in, but to say it is top-notch would be an over-statement.

In the end, X-Men Origins: Wolverine is much like God of War, but despite their extreme structural and mechanical similarities, Wolverine's presence as The Original Bad-ass (I'd back Wolverine in a fight with Kratos anyway), makes the game feel distinctly different, albeit related.  You probably just won't mind the similarities.  In fact, it's the perfect litmus test to gauge whether or not you will enjoy the game.  Did you enjoy playing any of the God of War games?  Do you like Wolverine?  If you answered yes, then X-Men Origins Wolverine is definitely for you!
Email Post
Labels: Game/Review