Time once again for This Week In Technology.
In keeping with our April Cyberpunk theme, I couldn't help but marvel at the fortune of finding Bruce Sterling's new novel on the new releases shelf at my library. Bruce Sterling for the uninitiated is often mentioned in the same breath as William Gibson and all of the other luminaries of the sub-genre. In short, he's totally O.G.

I haven't really read much by him, to be honest. Aside from his short story that appeared in Burning Chrome. His new novel, The Caryatids, published in February, isn't specifically referred to as cyberpunk, but the jacket cover does mention William Gibson and Neal Stephenson in the first sentence.
I have only just begun the book, so I can't really talk much about the plot, but in the first 25 pages there have already been numerous references to nanotech-based sensorwebs, exoskeletal suits called boneware, orbital cities, and of course, cloning (which I suspect is a pivotal/central aspect of the book). If that sounds interesting to you, I recommend checking it out. No pun intended.
Next up we have a trailer for a short film that also fits nicely into the cyberpunk sub-genre. Turbo is a movie by USC graduate student Jarrett Conaway. Essentially, this shoe-string budget, digitally made special effects extravaganza is about video games. The 20-minute film has all the trappings of cyberpunk from anime haircuts, to mirror shades, gesture-based interfaces, virtual competitions and meatspace brawls. Think of the fighting game played in 2005's The Island, only not lame or sponsored by Xbox.
Turbo: Trailer from Jarrett Conaway on Vimeo.
It was reported this week that Japan is aiming to send bipedal robots to the moon by the year 2020. The idea is still in the planning stages and will be formulated over the next two years. My affinity for all things robotic aside, I think this is a great plan. Call me crazy but it makes a lot more sense to send a robot to the moon rather than a person. I'm not so sure about the bipedal part though. How do you make sure that a bipedal robot stays on it's feet in low gravity? I suppose if a Segway can do it, then so can Asimo, but what's wrong with a lunar rover?
Following up from last week's post. I received my blu-ray copies of Akira and Blade Runner and while I haven't yet had a chance to watch them, I popped them in just to check out the video quality and am very excited for the feature presentation. Akira looks great and sounds even better, even on my sound-system-less TV. I was a little disappointed that the aspect ratio is not anamorphic, but that might have something to do with the original print. 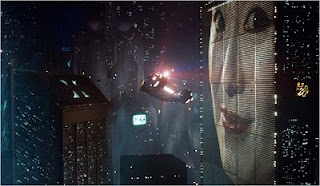 Blade Runner is unbelievably stunning. Having just watched the DVD version, the improvements are made to the remastered blu-ray are like night and day. I read somewhere that the fidelity of this new release is such that people watching it may have a better theatrical experience than those that went out see the film in theaters back in 1982. I'm inclined to agree. The special effects look amazing and the cityscapes breathtaking. It is truly going to be like seeing this film for the first time.
Email Post
Labels: Books Cyberpunk Month News Technology Video/Found