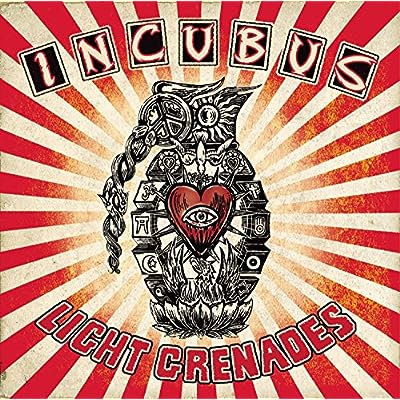 Incubus' sixth studio album 'Light Grenades' (released in Nov. 2006) is a a solid release that any fan of Incubus' previous three albums should enjoy and exalt.

Arguably, Incubus fans were split in 1999 when the band released 'Make Yourself' and made a go for mainstream notoriety. In 2001 the group released 'Morning View' further refining their new sound and creating one of this reviewer's favorite albums of all time. Later that year the world began to unravel a bit and even more so in 2003 and in 2004 Incubus responded with 'A Crow Left of the Murder'. This album brought Incubus' musical style back to formula and created something darker and pessimistic than before.

With 2006's 'Light Grenades' the band has struck a degree of synthesis between the two sounds. Whereas 'A Crow Left of the Murder' played as a confrontational statement of lamentation regarding current politics and society, 'Light Grenades' comes off more as psychedelic escapism.

This could not be more apparent than the opening track 'Quicksand' with its rolling waves of audio transmission coupled with languid, distored guitars and capped off by the sliding string intro of 'A Kiss to Send Us Off'. Incubus still demonstrates their propensity for rocking out on their second track.

For those who enjoyed the song 'I Wish You Were Here' from 'Morning View', the song 'Dig' will be instantly enjoyable. As soon as the bass rolls up under the shrill guitar and swells into an outpouring of emotion it's clear that even though this is familiar territory for Incubus, it's what we love them for.

The title track takes fans back to a sound they haven't heard from the band since 'S.C.I.E.N.C.E.', while 'Earth to Bella' balances delicateness with a heaviness we've not heard from Incubus before.

'Oil & Water' might be the hidden gem of the entire album. A driving melodic love song that is unfamiliar and yet fitting to Incubus' canon. Its' powerful rhythms and precise guitars overlaid with pining vocals and even bells(?) make the listener feel as if the whole world were insignificant compared to the subject of the song.

Other stand out tracks include 'Diamonds And Coal' (evocative of 'Morning View'), and 'Rogues' (evocative of 'A Crow Left of The Murder') as well as 'Paper Shoes' which starts out with an acoustic noodling that builds into purposeful rock.

In the end, 'Light Grenades' reconciles the differences between 'Morning View' and 'A Crow Left of The Murder' while managing to keep some of the soft and ethereal qualities of some of 'Morning View's' stand out tracks without loosing the bite of some of 'A Crow Left of The Murder's' stand out songs. Fans that were split one way or other over the last two releases should be able to find something to enjoy on the sixth album.
by Ahren Sievers at 4:16 PM
Email ThisBlogThis!Share to TwitterShare to FacebookShare to Pinterest